I remember as my Auntie became older I gave her the gift of time – we try to give this gift to loved ones regularly but sometimes daily life gets in the way – when my Auntie hit her 70s I made a point to going to Mount Ivy in Pomona New York on weekends and spending time with her. She loved her black and white films (as do I ) I remember curling up with a blanket on a Saturday afternoon – drinking tea or brandy and watching films – so today’s feature – Giant is a 1956 American drama film, directed by George Stevens from a screenplay adapted by Fred Guiol and Ivan Moffat from the novel by Edna Ferber. The film stars Elizabeth Taylor, Rock Hudson and James Dean and features Dennis Hopper, Sal Mineo, Rod Taylor,like holy super stars! . Giant was the last of James Dean’s three films as a leading actor, and earned him his second and last Academy Award nomination – he was killed in a car accident before the film was released. All the acting is stellar and especially James Dean and Elizabeth Taylor -The plot focuses on themes of discrimination (race, class and gender) as it affects the social evolution of a Texas family over a quarter century from the 1920s until after World War II. These topics -discrimination (race, class and gender) are still reverent today. 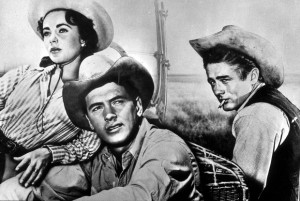 In 2005, the film was selected for preservation in the United States National Film Registry by the Library of Congress as being “culturally, historically, and aesthetically significant”. In the final scene back at the ranch, Bick Rock and Leslie Elizabeth watch their two grandchildren, one biracial (Jordy and Juana’s son), play in a crib and reflect on their life. Leslie tells Bick that she considered him to be her hero for the first time in her life after the fight in the diner, something he always tried to do with his ranching heroics. Reflecting on the Benedict family’s legacy, Bick views it as a failure because their lives didn’t turn out the way he planned, but Leslie considers their version of the family to be a success. The final shot pans to the face of each child, one white, one Hispanic, but both Texans. Dig It – if you have the time – this is a classic well worth time! Peace Perez