HIPCHICKALERT musical feature is the talented Dena DeRose.  Her latest cd We Won’t Forget You – An Homage to Shirley Horn is fresh and a great listen. I met Dena back in In 1991 – we became fast friends- when she brought the whole package to New York – singer – piano player – educator and lovely person. Dena has accumulated an impressive list of performance credits. From the legendary clubs around the world like the Blue Note, Smoke and the Jazz Standard in New York, the Kennedy Center in Washington D.C., the Pitt Inn and Body and Soul in Tokyo, The Jazz Showcase in Chicago, Marian’s in Bern, The Jazz Center in Istanbul, and Alexander Platz in Rome, to major Jazz Festivals that include The Red Sea Jazz Festival in Israel, The Monterey Jazz Festival, The San Francisco Jazz Festival, The Providencia (Santiago) Jazz Festival, Ancona (Italy), Estoril (Portugal), The North Sea and The Hague Jazz Festivals (Holland), The Jazz Cruise (2005, 2007, 2008, 2011), The Kansas City Jazz and Blues Festival, Jazz Baltica Festival (Germany), VinterJazz Festival (Denmark). Dena always delivers “…vivid and often exciting demonstrations of how innovative her musical concepts are…” (Philip Elwood, San Francisco Examiner). 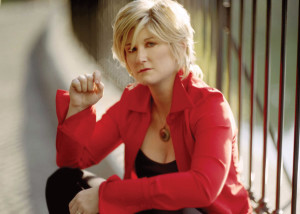 Dena DeRose my friend, has been heading the Vocal Jazz department at the University of Music and Performing Arts Graz where she now resides, but continues to travel worldwide to perform at festivals, clubs, concert halls, jazz societies, and private concerts. In addition to her Tenure at KUG, she was recently accepted by the ‘Fulbright Specialist’ Organization of the US Embassy in her field of Jazz Education and will travel to Izmir, Turkey to teach a 5 week residency at Yasar University.  Hip Chick she is – here’s a link to buy her music!
The Music of Swinging Dena