Today we celebrate 2 amazing comedians and this show – critically acclaimed show ”Broad City” on the Comedy Central. Its half-hour scripted series. It’s created by and stars Abbi Jacobson and Ilana Glazer as 20-something best friends.  They are trying to navigate life in New York, despite that their adventures always seem to lead down unexpected and bizarre paths. They have very little money, but they are survivors who aren’t afraid to throw themselves into sticky situations, no matter how messy the end results may be.does that sound fimiliar– it does to me as for it brings me back to my LA days.  I have watched this series and well it is a hip chick alert!  I laughed out loud so many times – its fresh and brilliant, funny, love to see and feel again the awkwardness of 2 girls in their 20’s. Jacobson and Glazer both honed their comedy chops at New York’s Upright Citizens Brigade Theater.  Dig it Dig them!  I do. 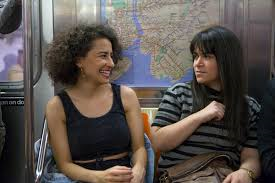 UCB co-founder Amy Poehler (one of my favorite ladies in comedy) is an executive producer on the series and joins Fred Armisen, Rachel Dratch, Janeane Garofalo, Michelle Hurst, Jason Mantzoukas and Amy Sedaris, among others, as guest stars.  So hip cats if you want to laugh out loud check this series out on Comedy Central.